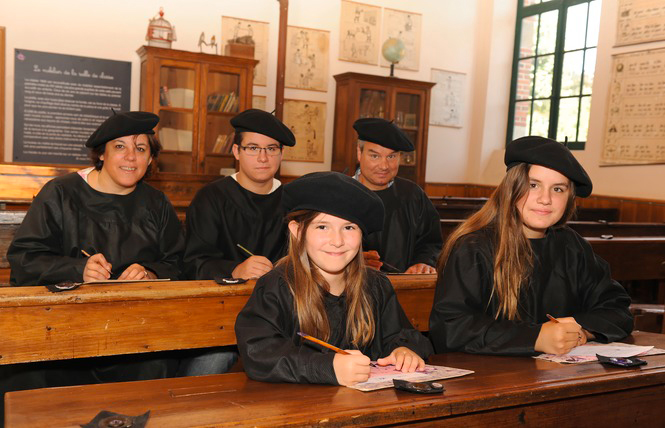 In 1999-2000, with the help of the municipality, a project to convert the entire school of Courlay into a museum was launched and led to the opening of the Tour Nivelle School Museum and Ernest Pérochon Literary House in the summer of 2000.

Those who wish to immerse themselves in the atmosphere of a school of yesteryear at the beginning of the 20th century should go to Courlay and visit the Tour Nivelle Museum.

The school of the past

On the menu, visit and discovery of a reconstituted classroom...

Dressed in the traditional school uniform: the blouse and the beret, you will relive a few hours of the day of a schoolboy in 1900. Moral and dictation will conclude this return to the past.
More than 780 images bring this school to life, maps, history, science, civics, daily life, or reading methods...
On the occasion of this visit, you will have the chance to meet and discuss with Philippe Rossignol, and rediscover the famous teaching boards created by André and Madeleine Rossignol.

Installed behind old desks, the animated visit of the classroom can begin: moral lesson on the blackboard, writing with a pen and purple ink... And why not a little dictation.

To finish, distribution of good points or dunce caps for the talkative ones.

The teacher's house and its old objects will plunge you into the daily life of that time. You will be able to visit the exhibition on Ernest Pérochon, writer of the beginning of the XXth century, Prix Goncourt 1920 thanks to his novel " Nêne ".

A former student of the Tour Nivelle, his childhood in the Bocage was a source of inspiration for him.

Originally, a fence separated boys and girls in the playground.

When the children arrived at school, they went their own way. The boys' entrance door, walled up, is still visible under their former playground. The fence disappeared in the 1920s, leaving a large courtyard.

On the occasion of the centenary of the 1918 armistice, the theme of the year 2018 will be dedicated to childhood in wartime and more particularly during the First World War.

The museum accepts donations from individuals or schools. They permanently enrich the museum's collections, allowing them to be preserved and passed on to younger generations.

The Château d'Oiron, an extraordinary castle dedicated to art and culture