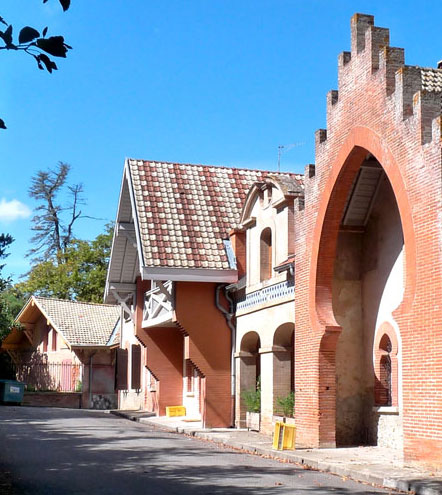 Located 37km from Toulouse, the village of Saint-Rome was imagined in the 19th century by a rich landowner, the Marquis Louis-César de La Panouse, originally from Toulouse.
His travels around the world gave him the idea of bringing together various architectural styles in one place.
At the end of the 19th century, like many places in the Lauragais, Saint-Rome was a small farming town where everyone worked for Monsieur le Comte, the landowner, who lived in the castle.
The estate was constituted from 1837 onwards by Alexandre-César de la Panouse who was one of the legitimists nobles under the July Monarchy.
It was his son Henri-Louis César who enlarged the estate and rebuilt it entirely. He undoubtedly loved his village, since he wanted to be buried there, in a tomb as modest as its constructions had been extravagant.
Most of the village is occupied by the owner's estate.
Outside the enclosure, there is the church, the town hall, which is very small, a few houses, a small district originally intended to house seasonal workers and other agricultural buildings.
There is also a Moorish house with a terrace and arched windows.
Further on, the house of the estate's steward seems to be straight out of a Vermeer and imitates the Flemish style. It is moreover attached, a strange association, to a Moorish-inspired cistern.
Over time, the Panouse family has given the church and cemetery of this former farming village to the municipality for a symbolic 1 franc.
The descendants of the count also sold almost all the houses to private individuals, but still retain the castle in which they still live today.

The camera left for Mars is from Toulouse

L'Auberge du Tranchoir or the Middle Ages in your plate