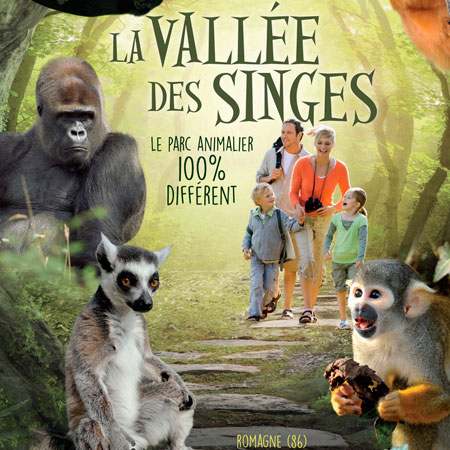 info_outline
You are here: Home / Regions / Nouvelle Aquitaine / 86-Vienne / The valley of the monkeys, an exceptional kingdom

The valley of the monkeys, an exceptional kingdom

More than 450 animals, divided into 34 species of primates, in total freedom on a 16-hectare wooded and natural territory, without barriers or cages, this is the largest site in Europe hosting chimpanzees and the largest group of gorillas in France.
The Monkey Valley is the only animal park in France to host Bonobos or Pygmy Chimpanzees.
Another record, the Monkey Valley offers the largest group of Bonobos in the world...
During your visit, you will be able to attend the feeding of all these monkeys which takes place regularly throughout the day.
The Monkey Valley has recorded more than 700 births since it opened in 1998.
In 2015 alone, Monkey Valley recorded 30 births, 1 Bonobo, 1 Red-faced Atele, 1 White-bellied Atele, 3 Guereza Colobus, 1 Colored Lemur, 1 Black Lemur, 1 Saki, 17 Saimiri, 2 Red-handed Tamarins and 2 Titis.
In 2016, in mid-June a new birth occurred: Moseka, one of the 32-year-old females of the group, gave birth to her baby! This gorilla is Moseka's 5th and 11th born at the Valley of the Apes since 1998.
The group had not welcomed a baby for 5 years! Indeed, reproduction in gorillas is very slow, a female can give birth to a baby only every 4 to 5 years.
Gestation lasts 8 1⁄2 months and nursing lasts about 3 years.
Various exhibits also take you behind the scenes of the Valley of the Apes: the arrival of a new animal, the care, the births, and the research conducted. A film recounts the birth of "Kwanza", one of the baby gorillas born at the Valley of the Apes.
On the estate, there is also a small farm where children can approach goats and sheep, playgrounds and two restaurant areas.
Also noteworthy are two new species, the Caped Gibbons and the White-belted Makis Varis.

Since the beginning of 2021, several monkeys have been born in the Valley of the Apes.

The Planet of the Crocodiles, unforgettable face to face

The Almond and Macaroon Museum