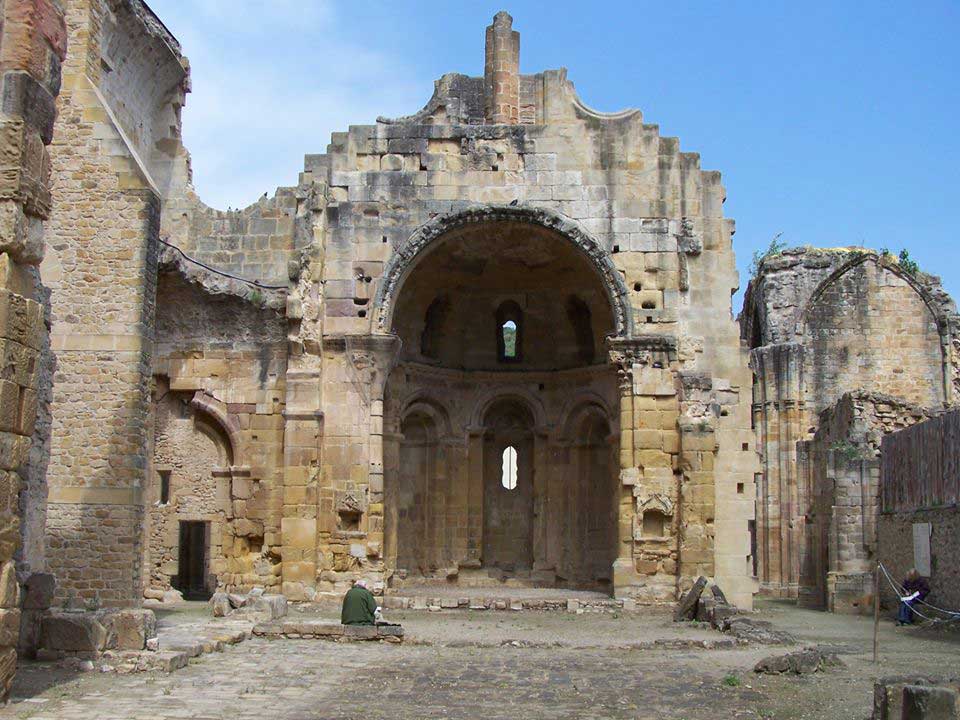 In the very heart of the medieval town of Alet, the abbey-cathedral Notre-Dame d'Alet is located on the access road to the Upper Aude Valley.
The origins of this Benedictine abbey are unknown: its foundation is attributed to the Count of Razès, Béra and his wife Romille in 813 but the document reporting this information is questionable.
Highly sought after for its strategic role, its history seems to boil down to a succession of quarrels and conflicts: for example, in the 11th century, it was ravaged by the Count of Carcassonne, then in 1119, Alet's rights over the abbey of Saint-Polycarpe were recognised to the detriment of the abbey of Lagrasse.
The 12th century marks its heyday, the abbey is very influential, attracting many pilgrims thanks to its relics of the Holy Cross.
But from the 13th century onwards, it experienced a new difficult period, notably with the election of a new abbot in 1197: Bertrand de Saissac.
Tutor of the young Viscount of Béziers Raimond-Roger, he did not hesitate to burst into the abbey, dig up the body of the former abbot and put it back on the abbey pulpit to force the election of one of his friends, Abbot Boson.
The consequences of the crusade against the Albigensians will greatly weaken the abbey through conflicts with the archbishop of Narbonne, and the confiscation of property.
It experienced an unhoped-for revival from 1318 when it was chosen as the seat of a new bishopric to fight against the reminiscences of Catharism.
The bishops are going to enlarge the old Romanesque abbey church to turn it into a large Gothic cathedral.
Included in the city walls, it was destroyed during the Wars of Religion.
It was never really rebuilt, the bishops used the old refectory as a place of worship.
Its history was still marked by the figure of Nicolas Pavillon, whose work illustrated the Catholic Reformation of the 17th century.
Although the degradation of the monument continued, it very quickly became a source of curiosity for scholars, even before it was classified as a Historic Monument in 1889.

Nothing to do with the Abbey, Nostradamus would have stayed at Alet les bains.

Michel de Nostredame, known as Nostradamus, born on 14 December 1503 in Saint-Rémy-de-Provence and died on 2 July 1566 in Salon-de-Provence, was a French apothecary and author.

Practicing astrology, he is best known for his predictions on the march of the world.

According to several sources, he was also a doctor, although his expulsion from the Faculty of Medicine in Montpellier testifies that it was not possible to practise both professions at the same time.

In Alet "his house" is located at the corner of Place de la République and Rue Malbec, an old alley leading to the Porte d'Aude, which has now disappeared.

The three-storey building, with its half-timbered and corbelled façade overlooking the square, reveals an early 15th century construction, but an inscription on the window sills overlooking Malbec Street announces the date 1647, while the famous engraved beams date from the 13th century. These are, of course, reused beams, as the present building was certainly rebuilt on the foundations of an earlier building.

The presence of Nostradamus in Alet, comes from an article by Jean-Marie Pelaprat, published in the review "Historia" in June 1982, that Michel de Nostredame, alias Nostradamus, has Jewish converted grandparents established in the city of Aleth. Here is an excerpt:

"The Nostredame, Jews converted to Christianity, are descendants of the tribe of Issakhar. In the Middle Ages, they were established at Notre-Dame d'Alet (Aude valley), hence their Christian name ".

Valgros, the abandoned castle... and burned down twice

label People from here Gastronomy [to eat] Made in Grand Sud